Working together with BRS, dk FIXIERSYSTEME have developed the necessary hardware for a measurement fixating system which makes the handling of batteries while being tested simple, reliable and extremely quick: the round cell adapter RZA. 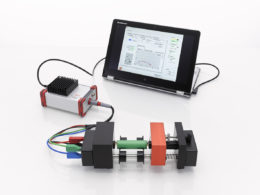 Intelligent battery testing technology is constantly and rapidly becoming more important with topics such as electromobility, power tools, buffer memory, emergency auxiliary power and other applications still in developement where battery cells are used in equipment. The testing technology from BRS is characterised by absolutely precise impedance measurement through four-wire measurement technology. Of course, capacity measurements of round cells using four-wire contacts is also possible. They ensure reliable values independent of the battery technology and make the testing system universally applicable. Core properties such as the availability of the energy from a power storage in the respective application are just as much tested, documented and communicated as the serviceability of a battery during developement and testing or the quality during manufacture. Using the BRS system, the diagnosis is quick and extremely precise.

The handling system hold the battery cells with the following requirements positioned and held them during testing:

The rest is quickly portrayed: The project was jointly drafted by BRS and dk. The specifications were compiled. A prototype was manufactured and further optimised. After a reasonable development period the round cell adapter was ready for the market in January 2018.

Would you like a callback? We are more than happy personally advise you about our products. Please leave your name, telephone number and a short message describing your enquiry.


Unfortunately, we are still missing a few details!

dk FIXIERSYSTEME is a specialist provider of modular clamping systems for measuring technology. The focus is on the professional fixturing of workpieces to inspection tables. Learn more.

dk FIXIERSYSTEME is a specialist provider of modular clamping systems for measuring technology. The focus is on the professional fixturing of workpieces to inspection tables. Learn more.